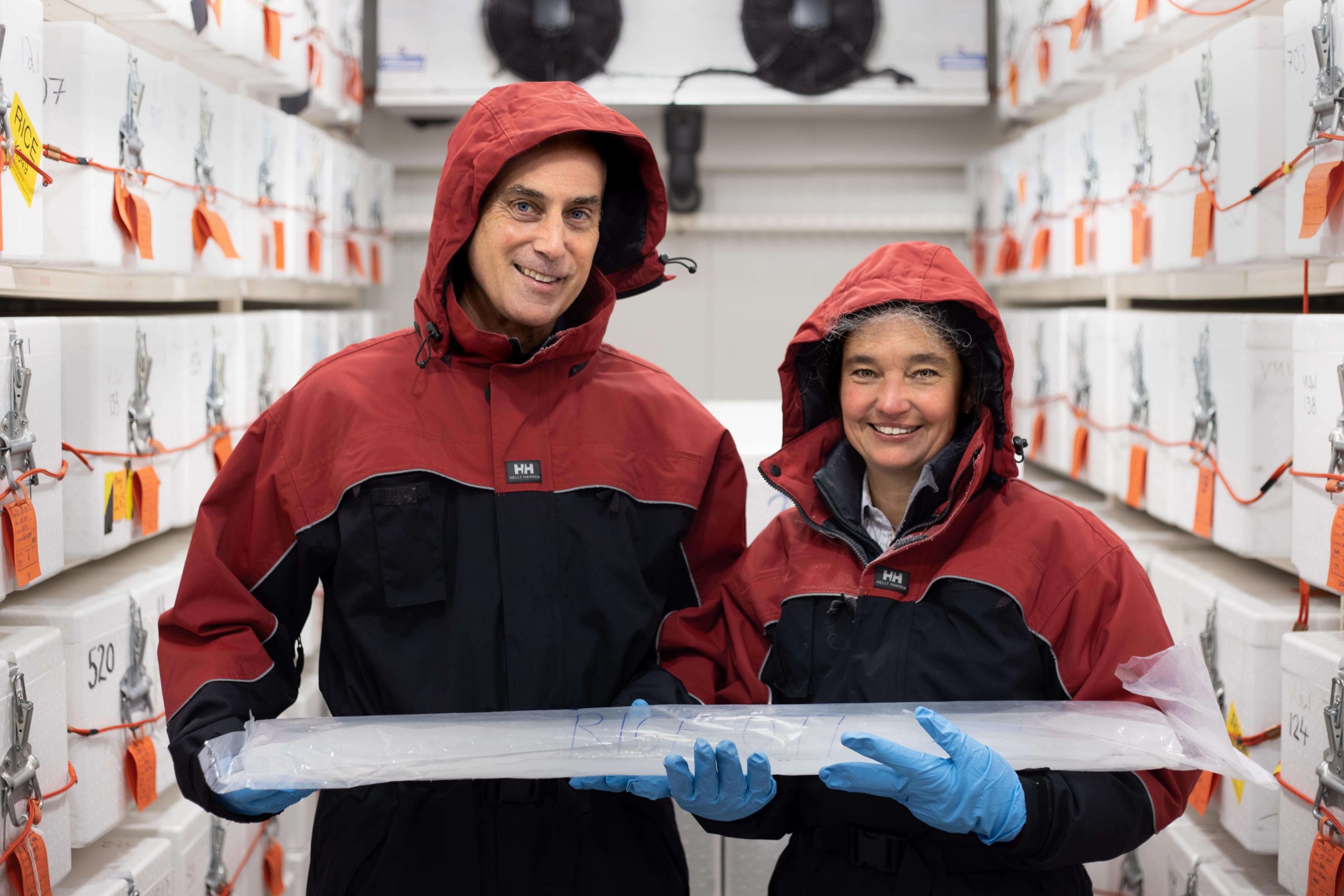 The New Zealand scientists behind the break-through discovery that Antarctica’s ice sheets melted rapidly in the past, and could have a significant impact on global sea level rise over the next 80 years, have won the 2019 Prime Minister’s Science Prize.

They found that Antarctic melt due to climate change could contribute to global sea level rise of 1.4 metres by the year 2100, rather than the one metre predicted back in 2013 by the Intergovernmental Panel on Climate Change (IPCC), the United Nations body charged with keeping the world up-to-date on the effects of climate change. When the effect of land subsidence is taken into account, the rise could be as much as two metres for some places in New Zealand.

Geological archives gathered on how ice had advanced and retreated over 20 million years have now been integrated with the latest ice sheet and climate models to show the impact of Antarctic melting under a warming climate.

They also found that Antarctica’s ice sheet has a stability threshold of 2  ͦC of global warming, and that there is still a pathway to mitigate the impact of sea level rise around the world.

Nominator Professor Dame Jane Francis, Director of the British Antarctic Survey, says the team has put New Zealand at the forefront of global environmental research. “Their research has made truly outstanding contributions to this major topic of concern.

“Their work has impact on a global scale. It is directly relevant to IPCC policy recommendations and to the global attempt to limit CO2 emissions, particularly to the Paris target to stabilise global warming below 2°C.”

Professor Francis said the New Zealand team had made exceptional scientific achievements, evidenced by the remarkable number of publications in highly-rated journals such as Nature and Science. “It’s quite an amazing record for any research team.”

Team leader Professor Tim Naish from Victoria University of Wellington says the work has involved annual expeditions by scientists who drill deep cores of sediment and ice below the floating icy fringes of Antarctica to understand how ice sheets responded during past times of warm climate. Though working in difficult, sub-zero conditions for weeks and months is challenging, Professor Naish says scientists have bigger concerns.

“The effects of global warming are incredibly urgent. The science tells us we have got to act if we are going to prevent serious things happening to Earth’s climate system and polar ice sheets.”

With the new evidence, scientists are moving their focus to communicating with decision makers on how to avoid the worst impacts of climate change. “There is still time to avoid major meltdown of Antarctica by controlling our emissions, in line with the Paris climate agreement.”

Professor Naish says winning the Prime Minister’s Science Prize is a huge honour for the team. “All of us find it so rewarding that we can contribute to this important research area, and make a difference for New Zealand and on the world stage.”

“Our team has diverse expertise and we’ve come at this problem from many different angles from fundamental discoveries to applied research.  We have international colleagues who look at us and say, ‘How did you guys in such a small country put together such a functional, world-class team?’”

“This work requires connections. It’s not something we can do by ourselves and it takes a massive team effort. Tim Naish has had the vision of what’s needed and brought all the components together to help us achieve what we have.”

Professor Naish also acknowledged the research of team member Emeritus Professor Peter Barrett from Victoria University of Wellington, who was Director of the Antarctic Research Centre for 35 years and led more than 20 Antarctic expeditions. “His work was pioneering, in both the drilling technology used to get the records and in building international linkages. We had that model to work from, we just took it to the next level.”

Director of the Antarctic Research Centre Associate Professor Rob McKay was a student during the early phases of this work. “A strength of this group is its nurturing of early career scientists. We were given responsibility early in our careers and taught that with an innovative mindset we didn’t have to go offshore to succeed. We can do world-leading science in New Zealand,” he says.

Dr Levy, who’s also Programme Leader of the New Zealand SeaRise Programme, says the significance of what the scientists are learning about climate change weighs heavily on their shoulders. “We need to tell people what we know and help them understand why it’s important to act sooner rather than later. It’s a pretty big responsibility, one that none of us take lightly.”

And Professor Naish says there is still much to learn. “Large parts of the Antarctic ice sheet will continue to melt so there are many things we still need to know. How close are we to that tipping point? How fast is sea level going to rise?”

A portion of the $500,000 prize will support a two-year postdoctoral research fellow to work with the NZ SeaRise Programme on Antarctic ice sheet dynamics and implications for sea level rise in New Zealand.

Representatives of the Melting Ice and Rising Seas team, based at the Antarctic Research Centre, Victoria University of Wellington are:

Professor in Earth Sciences at the Antarctic Research Centre. Lead author for the Intergovernmental Panel on Climate Change 2010-2013, former leader and co-chief scientist for the ANDRILL (Antarctic Drilling Project) programme and Chair of the International ANDRILL Science Committee. Member of the National Climate Science Advisory Committee to the Australian Government. In 2018 convened the World Climate Research Programme Melting Ice Grand Challenge. Winner of Tinker Muse Antarctic Science Prize, one of only 10 in the world. Fellow of Royal Society Te Apārangi.

Developed world-leading numerical ice sheet modelling to simulate the Antarctic ice sheet contribution to sea-level rise, and uses geological evidence of past changes to see how the ice sheet will respond to future changes in climate. His ice-sheet modelling work created a break-through which shows global sea level rise could be 1.4m by 2100. Lead author Intergovernmental Panel on Climate Change 2018.

Global leader in obtaining geological records from Antarctica by ship-based drilling in the Southern Ocean. Leader within the International Ocean Discovery Programme to take large scientific drilling ships to Antarctica. Involved in the ANDRILL project that showed the first evidence that the West Antarctic ice sheet had retreated in global climates of 2 to 3 degrees warmer. Won the 2011 Prime Minister’s Science Prize for an emerging scientist.

Led the Past Antarctic Climate Programme, which supported and advanced the team’s research in Antarctica over the past ten years. Leads the New Zealand SeaRise research programme, which provides site-specific estimates on the rate of sea level rise to 2100 and beyond for climate scenarios outlined by the IPCC, and communicates this to decision makers including a number of regional councils.

Three team members are Fellows of Royal Society Te Apārangi and several awards have been given to a number of team members in the past five years, including New Zealand Antarctic medals presented to Professors Tim Naish, Alex Pyne and Peter Barrett.