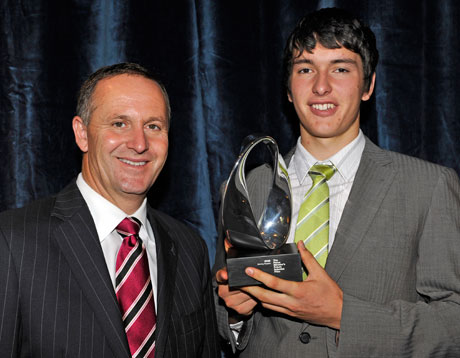 An 18-year-old student who has made ground breaking discoveries about the physics of light has won the inaugural Prime Minister’s Future Scientist Prize.

Stanley Roache’s research, which included what his teacher describes as a ‘true Eureka moment’ has resulted in him being able to explain why we see a series of rings and bands when we look down a metal tube with a shiny inside. Stanley’s modelling of why the rings start to distort when the viewer moves to the side of the tube is believed to be a world first.

His findings have potential applications for getting better and more accurate pictures in areas like medical imaging, where direct observation is impossible.

Stanley completed his Year 13 studies at Wellington’s Onslow College last year and is studying for a Bachelor of Science, majoring in physics, at the University of Auckland. He wins a scholarship worth $50,000 to help pay for his tertiary studies.

Stanley is also the winner of the Genesis Energy Supreme Award in the Royal Society’s 2009 Realise the Dream Competition.

Stanley’s prize-winning research began when he was selected as a member of the Onslow College team and later the New Zealand team, competing in the 2009 International Young Physicists Tournament (IYPT) in Tianjin, China. Discovering what causes the rings inside a shiny tube was one of the problems young physicists from around the world set out to solve.

The day before the New Zealand team was to compete in the finals, Stanley was still working on his presentation, trying to understand why the images start to distort at the edges of the tube.

His teacher, Kent Hogan, says participants went to the Great Wall of China the day before the final and Stanley spent most of the bus trip puzzling over the problem.

“Stanley gets this look when he’s thinking. Once we were back at the hotel he got the look, went away for quarter of an hour and came back saying he’d worked it out. It’s the only time I’ve ever witnessed a Eureka moment. It seems to be a completely new discovery – we’ve done a lot of looking and haven’t found any other explanation of this phenomenon.”

It took Stanley and Kent until two in the morning to model and photograph Stanley’s discovery. The New Zealand team won a silver medal in the competition.
Stanley continued working on the topic when he got back to New Zealand and has completed a comprehensive study involving theory, experimentation and computer programming.

Stanley has always been good at maths but says it was getting involved in the IYPT that really sparked his interest in physics.

“What I loved was working things out for myself. Some students are turned off by science because teachers tell them a lot of things and ask them to do experiments that have a predictable outcome. What makes science exciting is when you find things out for yourself.”

Kent, a physics teacher at Onslow College, describes Stanley as the best student he has ever taught.

“Of course being so good at maths is important but the main thing is Stanley’s understanding of the physical world and his ability to persevere with his thinking. What makes a good physicist is asking the right questions and having the interest to keep on asking them.”

Kent says New Zealand regularly punches above its weight in the IYPT. “That’s partly our Kiwi ingenuity but also because the New Zealand curriculum emphasises problem solving,” he says.

Stanley says one of the biggest gains he has made so far as a result of his participation in science contests is greater confidence as a communicator.

“I have come to see that it’s really important to get your ideas across to other people if they are going to be understood and ultimately used to make a difference to the world.”

Stanley has been part of a group that has visited primary schools in Wellington and talked to pupils about physics. Island Bay School parent Tracey Bridges says the experience ignited her daughter’s interest in science.

“I’m not sure she even knew physics existed before meeting Stanley and the rest of the team. She came home buzzing and it’s definitely contributed to her being more interested in maths. She says she liked learning about things like friction, but also that the teenagers were cool.  She got such a lot out of talking to teenagers who were so excited about learning.”